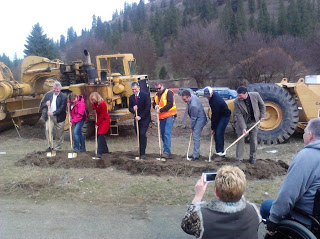 New Washington State Department of Transportation Secretary Lynn Peterson was just at the SRTC Board meeting, and it’s only her second day on the job! She came to Spokane for the groundbreaking ceremony of the 195 Interchange, stayed for our meeting, then took an STA bus to the airport to catch her flight back to Olympia. Wow, I’m impressed already. Yesterday it was a Pope that uses public transportation and today we get a new Transportation Secretary that does.
Ms. Peterson got to know Board members a little before the meeting started, then spoke for a few minutes about her impressions so far. It was gratifying to hear her say that Washington transportation agencies have done a lot in the way of coordination and leveraging each other’s work.
Spokane City Councilmember Nancy McLaughlin asked her what Governor Inslee’s transportation priorities are. Ms. Peterson said finishing ‘mega projects’ and maintaining the existing infrastructure while building safe and health communities. She also mentioned getting more electric and hybrid cars on the road and more people on public transit. 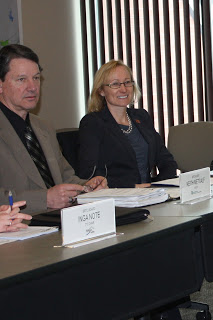 ﻿﻿Spokane County Commissioner Al French asked Ms. Peterson if she had any ideas for funding transportation in the future. She said that she’d like to see a state-level version of the TIGER program that helped fund construction of the North Spokane Corridor (NSC) and is interested in further studies of programs where you pay per mile versus a gas tax. ﻿

﻿﻿﻿﻿County Commissioner Todd Mielke pointed out that the NSC was one of three mega projects a couple years ago statewide and the other two have been funded and construction completed. When asked if she’d been versed on the NSC, Peteron pulled a “Complete the North Spokane Corridor” sign out of her bag and waved it around, and also pointed to the neon orange “Jobs” pin on her lapel, both courtesy of Wayne Brokaw, Executive Director at Inland Northwest Associated General Contractors.

E. Susan Meyer, CEO at Spokane Transit, asked what Peterson’s 30 day plan is. Peterson said she will start with reviewing the executive management team at WSDOT, start strategic planning processes and start forming partnerships. She said not to call her yet though because, at just day two two on the job, she doesn’t know her cell phone number yet.
Liberty Lake Mayor Steve Peterson, Chair of the SRTC Board, concluded the session with Peterson and said he has invited her back for a bike ride on the Centennial Trail. Peterson, who previously worked for the Oregon Department of Transportation (ODOT), said she’s already challenged the ODOT director to a bike race between ODOT and WSDOT employees. This should be interesting.