Will Your Future Home Be In A Parking Garage? 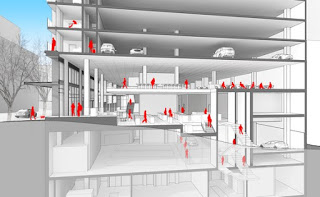 Will your next home be in a parking garage? Possibly, but not because you are living in your car. Wired says people in the future may be living in remodeled parking structures as parking rules change and less parking is needed as new forms of transportation become available along with new technology.

Currently, a tower is in the works at 4th and Columbia in Seattle which will include residential units, a hotel, office space, retail, parking and plans to overhaul the parking levels into living space in the future when it becomes needed.

It’s not as easy as it sounds though- floors must be reinforced to support future furniture and appliances, support columns must be placed so they don’t ruin the look of a future living room, ceilings should be high in order to be attractive and areas must be preserved where ductwork can eventually be placed.

And floor leveling is the biggest challenge. Most garages are built on a slight incline, so water or snow vehicles carry in runs toward built-in drains. The Seattle tower solves this by building completely flat floor plates and using an elevator to carry cars between floors.

One drawback though- building for a future retrofit costs more money, usually at least five percent more, which can add up to several million.