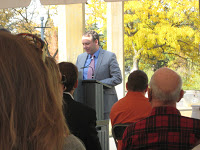 What a cool event! I just got back from The Lighthouse for the Blind’s White Cane Walk event and am really impressed.
Lighthouse opened in Spokane in 2008 as a manufacturer of a variety of projects that it hires blind people to make. It currently employs 52 blind or sight impaired people in Spokane and plans to add more jobs in the years to come. Products currently manufactured at the INL include Quartet/SKILCRAFT co-branded wallboards, hanging file folders, spring-back binders, paper trimmers, and dry-erase easels. You can find out more about the The Lighthouse for the Blind here.

There were a lot of dignitaries at today’s event, talking about what a great thing Lighthouse has brought to our community and how we are trying to improve conditions, such as transportation infrastructure, such

What I really enjoyed though was listening to the people that actually work at Lighthouse. One gentleman talked about how he has worked up to being a machinist, and his family’s main provider, over the four years he’s been there. He also talked about how he almost fell in a six foot ditch on his way to work one day because a construction site wasn’t adequately marked with cones and tape. He said that without his white cane telling him there was nothing ahead of him, he would have been at the bottom of that hole. 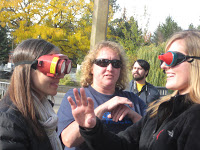 Another woman told me about an area that has a decorative sidewalk of brick, but no delination between it and the street, like a curb, and how that’s a falling danger to people with sight impairments. And before Lighthouse came to Spokane, our area didn’t have a single audible crosswalk signal; the signals that make a sound when it’s safe to walk. There are several of them now but Lighthouse has a walk of priority intersections where they would like more that I had no idea about. 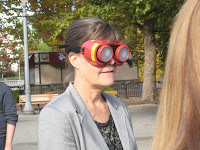 There was a demonstration on how to guide a blind or sight impaired person and we got to play with something called a mini guide that you hold in your hand and it sends out stronger vibrations the closer you get to an object in your path. Peggy, the woman doing the demonstration, told me later that, while being a pedestrian is a choice for someone like me or you, when you’re blind or sight impaired, it’s usually your only choice and walking is your main form of transportation. 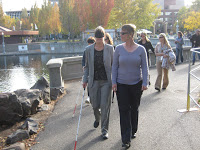 Then it was time for the main event; the White Cane Walk. Participants donned goggles, sleep masks, and other eye coverings to simulate sight impairment, grabbed a cane, a guide and, in a couple of cases a seeing eye dog, and set off across Riverfront Park to try their hand at getting around.

And speaking of dogs, one other thing I learned today is that The Lighthouse for the Blind actually has a kennel on site where seeing eye dogs spend their time while their owners are working.