Where Does Your Money Go When You Buy Gas? 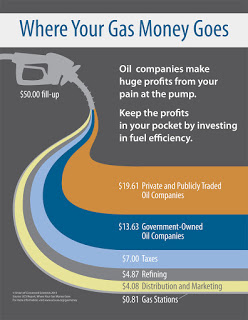 So you know that every time you fill your car’s gas tank, a certain portion of your money goes to a gas tax, the oil company gets some and the gas station ends up with a little. But how is it actually divided? The Union of Concerned Scientists (UCS) had that question and took a closer look and their conclusion; most of the money you spend at the pump goes directly to one place: oil companies.

A typical American spends more than $22,000 on gas over the lifetime of a vehicle purchased in 2011 with average fuel efficiency of 22.8 mpg. UCS says, of that amount, oil companies rake in about $15,000.

Where does the remainder go?
Here’s the full article and some cool charts and graphs as well.