When To Cross? When the Car Smiles At You 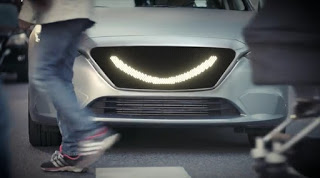 How do you know when it’s safe to cross the street? When the car approaching you smiles at you. A new self-driving car, called the Smiling Car, lights up with a smile to show that it has detected you and isn’t going to run you over.

According to Fastcoexist.com, when you’re standing on a street corner waiting to cross, you usually make eye contact with the driver of the car in your path to create some sort of understanding that they won’t drive into you. With self-driving cars, that doesn’t work. So the Sweden-based engineering firm Semcon had a little fun with technology in order to let the car “communicate” with others.

Eventually, designers say that eye-tracking and laser technology will be able to not only detect a pedestrian waiting to cross the road, but also small head or eye movements.