What Do Americans Buy With Their Saving From Cheap Gas? More Gas 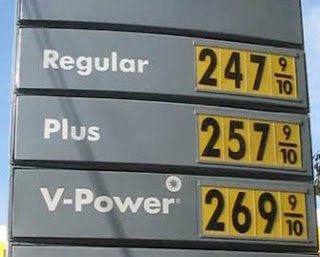 Gas prices are fairly low right now. So what are you spending your savings on? The New York Times reports that a new study by the JPMorgan Chase Institute says most people spend it on more gas. And better gas.
The report, which aimed to look at the impact of lower gas prices on consumer spending, finds the average American would have saved about $41 a month last winter by buying the same gallons and grades of gas as they do when prices are higher. Instead, Americans took home roughly $22 a month instead. That’s because they not only traveled by car more often but also bought the more expensive grades of gas.
So why did they do this? Researchers say people treat money as earmarked for particular kinds of spending. For instance, a certain amount per month is allocated to the mortgage, entertainment, gas, etc. If that amount isn’t spent, people still seem to find a way to spend it in each category.
The JPMorgan looked at spending on gas between December 2013 and February 2014, when prices averaged $3.31 a gallon. They looked at the gas spending of the same one million people in the same time period one year later, when average prices were a dollar lower. Results say that the average American spent $136 per month on gas during the high-price period and $114 per month on gas during the low-price period. While the price of gas fell about 30 percent, spending on gas declined by only 16 percent.