Walking School Buses- Ever Heard of One? 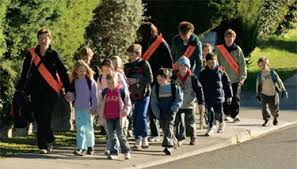 I’ve been saddled with watching some friend’s kids for a week while they go on vacation. I have no children of my own and don’t have any plans to so this has been somewhat of a culture shock for me. And apparently the way things are done has changed a lot since I was a kid. For instance, the 10-year-old I’m watching was extremely indignant when I suggested we walk to the bus stop this morning instead of drive. For the love of Pete, it’s two blocks! But her mother drives her every day so it was like I had suggested she crawl there on her knees.

So it was fitting that I attend a training session put on by the Spokane Regional Health District on ‘walking school buses,’ or ‘WSBs.’ What’s a walking school bus? A walking school bus is a group of children walking to school with one or more adults. If that sounds simple, it is, and that’s part of the beauty of the walking school bus. It can be as informal as two families taking turns walking their children to school to as structured as a route with meeting points, a timetable and a regularly rotated schedule of trained volunteers.

So why do we need to be trained in order to start one? Because there are a lot of questions parents have about safety and other issues, as well as some perceived barriers. For instance, the instructor, Robert Johnson of PedNet (a coalition out of Missouri devoted to building healthy and active communities) showed a picture of a bicycling class he taught at this time last year. The kids in the pictures were wearing jeans and long sleeve shirts but no hats, gloves or coats! His point was that parents don’t dress their kids for the cold anymore these days so they think their kids can’t walk to school when it’s cold outside. But ask a kid if he wants to go out and play and invariably they’ll be excited no matter what the weather.

Johnson also pointed out that crime hasn’t increased, just the coverage of it. So a lot of parents are worried about aductions when your child actually only has a .000133% chance of being abducted by a stranger. Even so, Johnson said that’s one statistic that often doesn’t sway parents. The dichotomy is that, while parents are charged with raising healthy, independent members of the community, the common perception is they’re bad parents if they let their children out of their sight.

The walking school bus is an intermediate solution though because the children walk as a group and with at least one adult. He said that most kids who start out walking with a WSB move up to walking to school on their own in the next few years.

One big argument against the walking school bus that many people use is that they live too far from the school. Johnson’s answer is that you can drop them off at a ‘bus stop’ within a mile of the school and they can join a WSB there. On the extreme side of that, Johnson cited a school in Missouri where the traffic from parents taking their kids to school is so bad that kids are now prohibitted from walking or riding their bikes to school. What’s crazy about that is that the kids that live across the street from the school now have to ride the bus for 45 minutes to get dropped off across the street from their house.

Johnson cited some statistics about how kids who get exercise daily do better in school and have fewer behaviorial problems. He then went into lots of details about how to start a walking school bus. So if you’re interested, check this link out. And if you want to go even further, let me know and I’ll hook you up with people who can help.