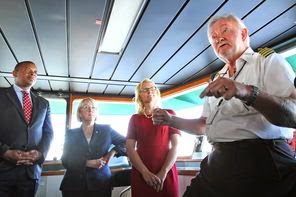 Washington State got a little love from U.S. Transportation Secretary Anthony Foxx yesterday, as he took a ride on ferry from Seattle to Bainbridge Island.

Foxx was in our state at the invitation of Sen. Patty Murray, D-Wash., who says a special federal fund for ferries is under siege in Congress, affecting Washington, New York, and North Carolina, among other coastal states.

While we’re not overly concerned on this side of the state, apparently the financial outlook for the nation’s largest ferry fleet of ferry boats is pretty bleak. Stands to reason though considering that’s the case for all of the state’s transportation system, though.

Here’s more on Foxx’s visit to the Evergreen State and his reaction to the ferry ride.