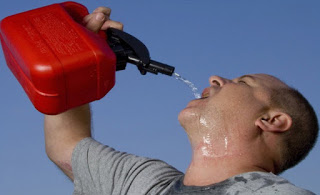 August was the biggest month ever in the United States for gasoline consumption. According to the Energy Institute at Haas, Americans burned through 9.7 million barrels per day- more than a gallon a day for every man, woman and child.

This comes as a surprise for some as analysts have said the U.S. reached “peak demand” in 2012 and that gas consumption would continue to decline in the foreseeable future. Ummmm, no. U.S. gas consumption has increased steadily four years in a row now for a couple reasons. Those include the end of the recession and people having more income, plus low gas prices.

Economists have shown in many studies that there is a definite relationship between income and gasoline consumption – when people have more to spend, gasoline usage goes up. During the recession, Americans gravitated toward smaller, more fuel-efficient cars. Today, they are buying bigger cars and trucks again and driving more miles. Gas prices were also high during the recession, above $4 a gallon at times.