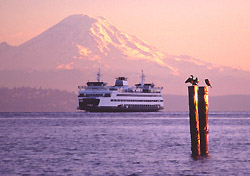 An idea being floated this week to Kitsap County commissioners would connect Seattle and Bainbridge Island with a tunnel, rather than a ferry. Q13 Fox News reports that a retired civil engineer, Bob Ortblad, says it would pay tax dollars, help the Orcas thrive and help the economy on both ends of the tunnel.

Ortland still teaches at the University of Washington on the history of infrastructure. He recently took a ferry trip to Martha’s Vineyard that cost him $137. In comparison, he used a tunnel in Iceland that was the same distance and the toll for it only cost $10. That got him thinking that, if Washington’s State Ferry system wasn’t so highly subsidized, a round-trip to Bainbridge would cost closer to $75 or $100.

So, now he’s proposing to dig a tunnel from Seattle’s Smith Cove, under Magnolia Hill, four miles under Puget Sound and resurface on Bainbridge Island. Based on the costs, he says, each two-lane tube would cost about $400 million, which Ortblad says is a little more than what is being spent to remodel Colman Dock for ferry usage.

Ortblad claims a tunnel would help make housing more affordable because it would be easier to access, taxes would be lower if we weren’t supporting a ferry for island residents and there would be less environmental problems from the boats. Ferry engines reportedly produce 102,000 tons of carbon dioxide every year, 125 tons of particulate matter and 2,000 tons of nitrogen oxides in the air. They have also been told by the governor to slow down in order to disturb Orca whales less.

In contrast, Ortblad said tunnels are open 24-7, handle a huge volume of cars and buses are not affected by wind, waves or fog.