Tuning A Car Radio Was Considered Distracted Driving in the 1930s 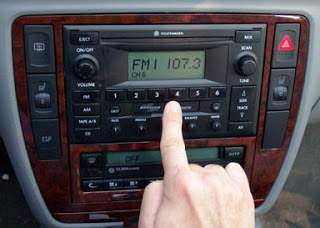 Speaking of distracted driving, according to Mental Floss, in 1930, laws were proposed in Massachusetts and St. Louis to ban radios while driving. Opponents of car radios apparently argued that they distracted drivers and caused accidents by taking the driver’s attention away from the road.

The first car radio was introduced in 1922 by Chevrolet. It cost $200 and had an antenna that covered the car’s entire roof, batteries that fit under the front seat and two huge speakers attached behind the seat.

By the early 1930s, the more streamlined built-in Motorola radios were standard features in cars.  By 1946, 9 million cars had radios. By 1963, 50 million cars – over 60 percent – were outfitted with radios. By then, over one third of America’s radio listening occurred in the car.

Anti-radio laws were signed in small municipalities but were mostly ignored. In 2002, the NHTSA blamed 66% of the 43,000 fatal car crashes on “Playing with the radio or CD.”Conversely, here are some statistics from Mental Floss on another distracted driving practice; texting and driving: