They Came For The Cookies & Stayed For The Game

As I’ve been talking about for weeks, last night was the community workshop for SRTC’s Transportation Vision Project.

We had a good turnout, with people divided up into groups to play ‘1000 Visions- A Transportation Vision Game.’ And while it sounds kind of cheesy, it was actually fun and kind of eye-opening. The goal was to determine what kind of taxes to approve, which dictates what your budget is for transportation. Then you move around a gameboard, stopping on each square with a project name on it. 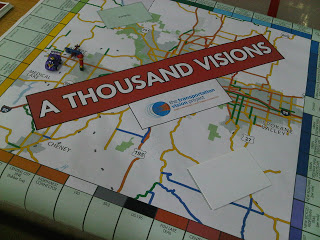 For instance, if you land on the North Spokane Corridor, you have to decide if you want to spend $315,990,000 to complete the project. If you decide to fund it, that money comes out of your budget and you have less money for other projects down the line.

I work with people in the tranportation field every day, so it was interesting to hear a group of ‘civilians’ discuss why or why not they would fund certain projects. For instance, on the NSC, my group (who were VERY fiscally conservative) decided to fund it to spur economic growth, not because they want a way to get north and south quicker. 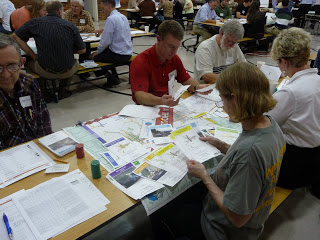 The group decided against ‘north-south’ and ‘east-west’ connectivity projects because they said the freeway and north Spokane Corridor will take care of those issues. And they went with most of the trails and pedestrian options because they are inexpensive. 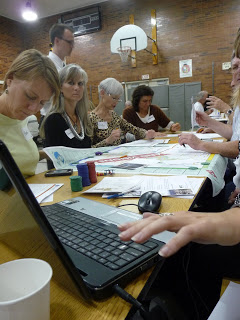 The game will be put online within the next few weeks so those who couldn’t make the workshop can give it a shot. I’ll post it then. Until then, do any of you that attended the workshop have anything to add? Did you find this exercise useful?