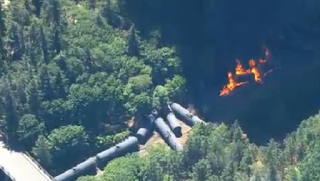 Spokane’s City Council is asking Union Pacific to halt train shipments of oil through the Columbia River town of Mosier, Oregon, until the oil tankers from Friday’s derailment are removed from the accident site.

According to the Spokesman-Review, the council voted 5-1 last night to make the nonbinding request, with councilman Mike Fagan voting against the resolution.

Last weekend, a train derailed, catching fire and forcing residents of the Columbia River Gorge town to evacuate. Just three days later, UP’s trains were moving through the town again, even before the derailment mess was cleaned up. The town’s mayor and fire chief expressed concerns about running trains before an investigation was complete and the damaged tankers cleared.

The Spokane City Council’s resolution backs the city of Mosier’s request for a temporary halt in rail traffic until hazardous debris has been removed and the site has been inspected and declared safe.