So it’s Friday. You deserve a change of pace and my accountant says that if I want to write off any of my recent vacation I have to show that at least a small portion of it was work-related. So bear with me while I treat you to some transportation-related pictures from Hawaii. And feel free to ask questions, that makes it really seem work-related in case the IRS comes calling later.

This is SRTC Transportation Planner Bonnie on a scooter that the resort security officers use. How cool is that thing? We’ve asked about the possibility of getting a company car before here at SRC, but I think we should push for one of these instead.

If we can’t get that scooter, maybe the boss man will agree to this little number. These were little mopeds that you could rent. Before embarking on our trip, we had discussed that we wanted to rent mopeds for at least one day. Once we got to Maui though, it became obvious that Maui traffic is too dangerous for bike or moped riding in most areas. The few mopeds we did see were operating in the bike lane and the even fewer bicyclists we noticed were weaving in and out of traffic.

That yellow writing on the car door says ‘Abandoned vehicle’ but who would abandon this beauty? It’s a perfect island car. It was weird, while driving in the more rural areas, we saw abandoned cars all over. All I can figure is, being an island, maybe Maui doesn’t have wrecking yards so there’s nothing to do with old cars you can no longer resell? I haven’t done the research on that though, and will have to look into it.

This was an unusual traffic sign that we saw on the famous road to Hana. Not state-sanctioned, I’m sure. So great, I was thinking; in Washington and Idaho you have to watch for deer and elk crossing the road. In Hawaii it’s papayas! I don’t even think I’d recognize a papaya if it crossed in front of me. I’d smoosh it before I’d realize what I’d just hit. 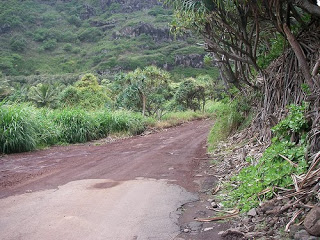 And finally, this is the not-so-famous Pilani Highway, but it should be much more famous than the Hana Highway. Most people make the famed trip to Hana, then turn around and come back the way they came. Not our group of stubborn, independent, tourists who all work in transportation and wanted to see how bad of a road it could really be. So, we decided we would take the long way, and it was really bad. And despite Pilani being a state highway, it was not only long but treacherous as well. The road was dirt in most places, only about a car-width wide and had tons of blind corners where you could easily fall off the cliff into the ocean if you were in the outside ‘lane.’ Way worse than the Hana Highway. Oh yeah, and the rental company had asked us not to take our rental car there, but we viewed that more as a suggestion than a mandate.

So any questions? I also have a picture of a submarine but since the majority of people don’t travel by sub figured it probably wasn’t appropriate for this post.