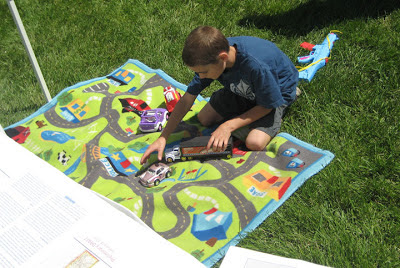 I had the pleasure of hanging out in the small town of Fairfield this past Saturday for their annual Flag Day celebration. I had a table in the vendor area at the event, to talk to people about our Metropolitan Transportation  Plan, Horizon 2040.

My secret weapon was this child-sized transportation system rug. It sucked the kids in and while they were playing, it left the parents with little to do besides talk to me. Diabolical, I know. But effective.

I got a good variety of input and thoughts too. It was a nice cross section of folks who live in Fairfield and provided perspective on small town transportation issues, people who travelled there for the day from Spokane and even a gentleman from the west side who said even he believes Eastern Washington gets overlooked when it comes to transportation funding.

Here’s a sampling of what I heard:

Yes, I actually did get that last comment. It came from two gentlemen whom I suspect had been in the beer garden before talking to me. And apparently there is fun rivalry between Fairfield and Rockford. I pointed out that in the movie Space Balls, a spoof on Star Wars and Star Trek, a haywire transporter put one character’s head on backwords. One of those guys suggested we practice on Rockford residents in that case and the other said, “That would put their heads on right.”
Now I guess I have to go to Rockford to get their side of the story.