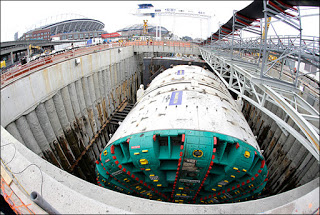 Washington State Department of Transportation officials recently announced that work on the State Route 99 tunnel will resume on Nov. 23, according to the Roads & Bridges website. The giant drill known as “Big Bertha” that is being used to bore under the Seattle waterfront is expected to surface at the north end of the city’s downtown area approximately one year later.

The officials word is that the S.R. 99 tunnel is now scheduled to open by spring 2018. This is about three years behind the original date of late 2015, due to several issues.

Crews stopped tunneling in Dec. 2013 after Bertha overheated, after which an investigation discovered damage to the seal system that needed to be replaced along with the main bearing. Then crews spent most of 2014 digging a pit to access the front of the machine so the cutter head could be repaired.