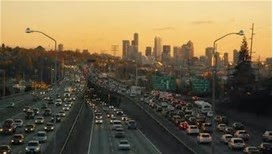 Two weekends ago, 70 web developers and engineers, designers, data analysts, transportation advocates, traffic engineers, and bureaucrats got together for an event called Hack the Commute. The objective: Take public and private transportation data and create or improve apps and produce data analysis and visualizations that make it easier to travel in Seattle.

The city consistently ranks in the top 10 worst U.S. cities for gridlock. Funding to fight it is very limited and the terrain limits options to expand transportation facilities.

Instead, the city is looking to use technology. Some of the projects that were worked on included finding better bike-share routes, apps to help decide what mode to use based on parking availability, and more.

After two days of furious coding and testing and tweaking, each team had five minutes to pitch their product to a panel of judges. Three finalists were chosen. http://nextcity.org/daily/entry/seattle-transportation-apps-hack-the-commute-event