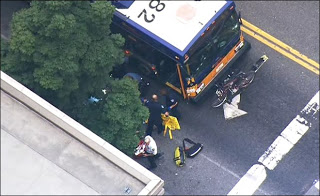 A Seattle Metro bus driver was shot multiple times Monday morning by a passenger while on his route. The incident unfolded just before 9 a.m. One witness said the suspect was disputing the fare with the driver, then pulled out a gun and opened fire. The driver was hit multiple times but his injuries are not considered life-threatening.

The gunman fled, eventually boarding another bus, where he was shot and critically wounded by police. KOMO News has the entire story.