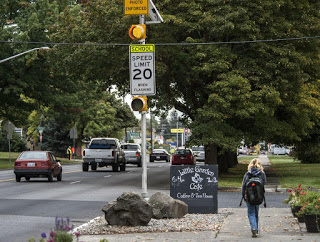 Fines paid by people caught speeding in school zones will be split between paying for neighborhood cops and sidewalk improvements through 2018, and the city will look into expanding enforcement cameras next year.

According to the Spokesman-Review, the council last night approved a resolution approving installation of school zone cameras at Stevens Elementary in the Chief Garry neighborhood and Lincoln Heights Elementary on the South Hill next fall, pending the outcome of a report on the effectiveness of cameras at their two existing locations.

The city estimates it will collect $1 million in fines this year from the speed zone cameras. The large amount led city officials to rethink how to spend fines collected from traffic cameras. Previously, the were only spent on traffic safety projects.

The resolution finalizes the decision to split the collected fines through 2018 between salaries for four resource officers and projects to slow traffic and allow safe walking routes to schools for students.

Councilwoman Amber Waldref, the lone vote against the proposal, said the city needed more time to explore whether the cameras were effective before expanding their use. The cameras were installed in November 2015, and the city didn’t begin issuing tickets for violations until January.

Using the money collected from speeders to fund the four new officers, who will split time between improving safety at school and addressing property crime in surrounding neighborhoods, was already agreed to in the 2017 budget approved by the City Council last month. The vote Monday confirmed the salaries of those officers would also come out of the school zone camera fund in 2018.