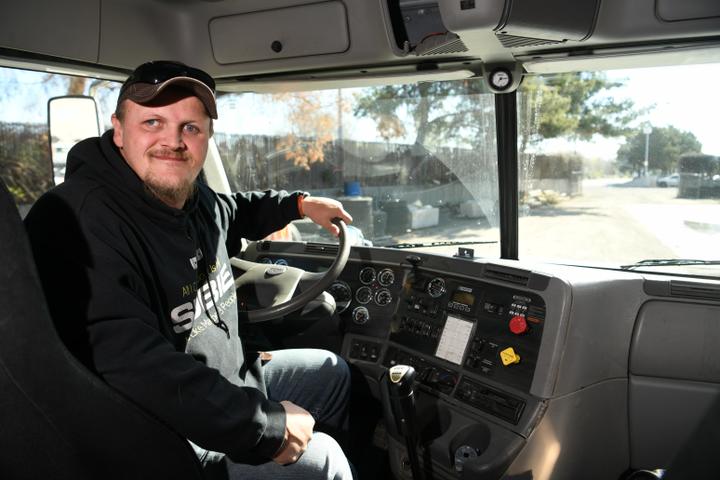 Justin Brooks was born deaf, meaning, until recently he wasn’t eligible for a commercial driver’s license. He said he inquired about a trucking career after graduating from high school in 1999 and was told it wasn’t possible. Ever since, he said, he has bounced from one unsatisfying restaurant job to the next. Nearly a year ago, he started pursuing a federal disability waiver that allowed him to forgo a hearing examination typically required by SCC’s four-week driving course. When he got the final approval, the college provided interpreters,  plus made sure all course materials were in writing and placed a large, fish-eye mirror on the dashboard of a semitruck used for training students. From the driver’s seat, Brooks could see an interpreter seated behind him to understand the instructor.

Apparently it’s not super unusual to be a deaf truck driver though. Hundreds of other deaf people have become truckers since the Federal Motor Carrier Safety Administration, a division of the U.S. Department of Transportation, changed its policy in 2013 under pressure from advocacy groups. The National Association of the Deaf has cited research showing deaf drivers are just as safe as hearing drivers, in part because they are not distracted by noises such as the loud vibrations inside the cabs of big rigs. Brooks has had his standard drivers license and been driving a car since he was 16.

He dismissed the idea that he must be able to hear the sirens on approaching emergency vehicles – that’s what the flashing lights are for.

Brooks left Spokane for Kansas City, Missouri last week where he has already secured a job with a major trucking company.