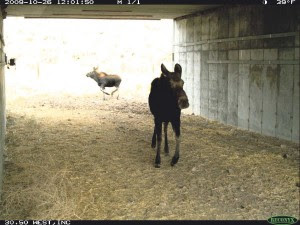 When I heard that the Washington State Department of Transportation was going to install ‘wildlife underpasses’ under I-90 between Hyak and Keechelus Dam on Snoqualmie Pass, I wasn’t convinced animals would use them to get from one side of the highway to the other. Call me skeptical, but how would they know to use the underpass versus crossing the road? Would the signs posted point them in the right direction?

So yesterday this story popped up: six underpasses in Wyoming are getting lots of users in the form of big game. Cameras installed in the tunnels show thousands of animals using them. Who would’ve thought it? I can’t even convince my dog to stay off the couch, but apparently large animals know to use a tunnel versus the surface route.

Here’s the story from the Billings Gazette.

Does it surprise you that this large a number of animals are using these underpasses? Did I just not give the animals enough credit?