Salt Lake Experiments With Putting Buildings In the Median of Roadways 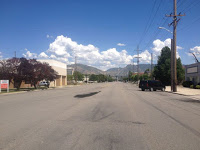 Besides putting a road on a road diet to narrow it down and add bike lanes and sidewalks, what else can you do with wide roads? Gizmodo reports that Salt Lake City has been testing an idea of “median development,” or building retail and residential space in the median.
Salt Lake City has very wide roads, allegedly because Brigham Young wanted a team of oxen and a cart to be able to turn around in the street.

This leaves a lot of wasted space, so Salt Lake officials have been experimenting with ideas by using shipping containers to build what they’re calling “Granary Row,” temporary structures meant to mimic potential development for the area.

The group behind this idea, Kentlands Initiative, is now working with the city to lease the median for 99 years to permanently build retail and residential space.