Riders Form Their Own Union In Response to Subway System Problems 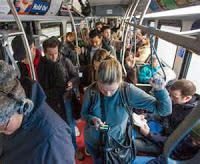 Okay, so if you work at a transit agency, you are usually part of a union. But now some actual transit riders have formed their own union. The Washington Post reports that Metro riders in Washington, D.C. are so tired of service reductions, delays and over crowded trains that they’ve started a riders union and held their first organizations meeting.

The group has already grown to over 400 members and organizers say it will serve as a unified voice for the public. The group is also hoping to get a rider representative on Metro’s Board.