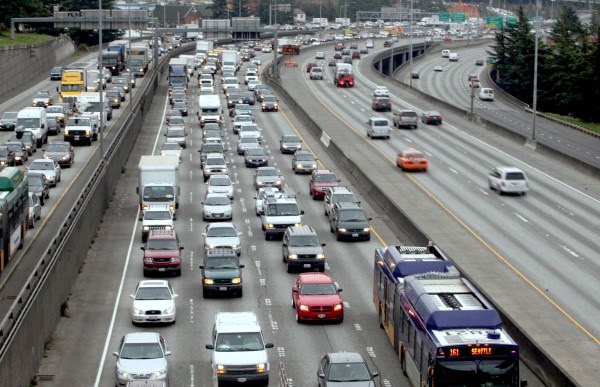 You know how there is a backup every night around 5 p.m. on eastbound Interstate 90 between downtown and about the Thor/Freya exit? And every time you’re thinking that there must be an accident ahead or construction slowing everything down but eventually traffic just starts flowing smoothly again? Well there’s apparently a name for that- “phantom” traffic jams- and a solution.

LiveScience says the super complicated answer revealed through new research is- are you ready for this?- maintaining equal spacing between cars, rather than tailgating. Massachusetts Institute of Technology (MIT) computer science professor Berthold Horn says a phantom jam begins when a car in dense traffic slows down even slightly, causing the car behind to slow even more, causing a chain reaction of slowing vehicles backward through the lane of traffic like a wave, getting worse the farther it spreads. Eventually, the cars far behind are forced to stop completely or risk hitting the slower vehicles ahead.

Horn says years of studying the problem has helped him come up with a solution: by splitting the difference between the cars in front and the cars behind, it can prevent the slow-down effect from being amplified by the cars that follow behind. In essence, each driver would constantly make adjustments to keep his or her car roughly halfway between the car in front and the car behind.

Horn says this spacing could be achieved with relatively simple modifications to the adaptive cruise control (ACC) that many new cars already have. His researchers made computer models of real-world traffic conditions, showing how a typical U.S. freeway could benefit from cars using this spacing. Since starting his research on phantom traffic jams, Horn has learned that schools of fish and flocks of birds and bats use similar spacing strategies to avoid hitting each other while swimming or flying in densely packed groups. Unlike bats, birds and fish, however, humans have difficulty judging distances behind them. Horn is now working with Toyota to enable modifications to existing adaptive cruise control systems, which use forward-facing sensors to judge the distance to the vehicle ahead. His suggested bilateral control approach would include adding rear-facing sensors to determine the distance to the vehicle following behind a car.

But until those systems become standard, human drivers can help reduce phantom traffic jams simply by not following other cars so closely.