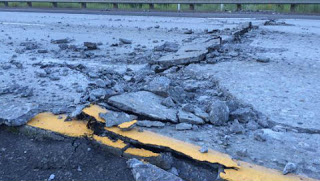 Yesterday’s heat was so intense that it not only broke records across the area, it also broke an actual roadway! The Spokesman-Review reports that a stretch of U.S. Highway 195 ruptured Monday, baking the pavement of the northbound lanes near Mullen Hill Road until it actually split.

Crews closed the highway until they were able to get it fixed early this morning.