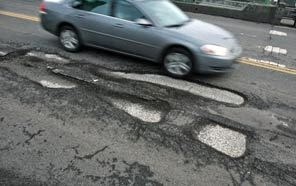 From what I’ve heard, people have a lot of questions about the City of Spokane’s funding proposal to maintain and rebuild streets and improve Riverfront Park. Apparently the folks at the City have heard this too because they are hosting a series of meetings to
provide opportunities to learn about and comment on the plan.
The streets and parks refinancing proposal would reportedly provide new work for the same amount citizens pay now for streets and parks. Currently, they pay 91 cents per $1,000 of
assessed property value toward the repayment of three street and park bonds.
With strategic refinancing, that money could provide:
·
$25 million annually for street funding. That level of spending, which includes matching funding, would maintain the
level of work completed annually on arterials and residential streets under the
2004 Street Bond.
·
$60 million for implementation of the new
Riverfront Park Master Plan; developed with considerable public input.
·
Retirement of the current debt.
Meetings will be held:
·
Tuesday, May 13, Westview Elementary School,
3520 W. Bismark, 6:30 p.m.
·
Thursday, May 15, City Council Chambers, lower
level of City Hall, 808 W. Spokane Falls Blvd, 5:30 p.m. This meeting will be
taped for replay on CityCable 5.
·
Tuesday, May 20, Jefferson Elementary School,
123 E. 37th Ave., 6:30 p.m.
·
Thursday, May 22, West Central Community Center,
1603 N. Belt, 5:30 p.m.
·
Tuesday, May 27, Lidgerwood Elementary School,
5510 N. Lidgerwood St., 5510 N. Lidgerwood St., 6:30 pm.
·
Wednesday, May 28, Southside Senior Center, 3151
E. 27th Ave., 5:30 p.m.
·
Thursday, May 29, Northeast Community Center,
4001 N. Cook St., 5:30 p.m.
Spokane citizens are repaying the 2004 Street
Bond, the 2007 Pools and Play Bond, and the 1999 Park Bond. That includes 57
cents per $1,000 of assessed property value, or $57 a year on a $100,000 home,
for repayment of the Street Bond. Payments will continue for 16 years without any new street improvements.
For that same 57 cents per $1,000 of value, a levy would
generate around $5 million a year to fund new street work. Those funds would be
matched with state, local, and federal transportation and utility dollars to
support about $25 million in street improvements annually.
A similar refinancing opportunity is possible for parks.
Citizens currently pay 34 cents per $1,000 of assessed value, or $34 a year on
a $100,000 home, for repayment of the parks bonds.
Some park bond payments are scheduled to continue through
2027, without any additional park enhancements. For that same 34 cents per
$1,000 of value, a new bond would provide $60 million to implement the new
Riverfront Park Master Plan and still pay off the remaining debt from the 2007
issue.