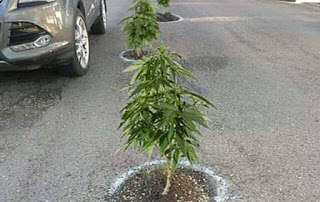 Some California potholes are now pot holes. Residents of Nevada City, CA residents got tired of waiting for the city to fill potholes and did it themselves- with pot plants.

So far, the plants are still in the holes and there’s no word from city government on when the holes will be filled with actual asphalt.