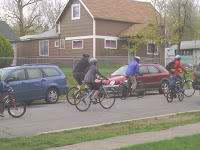 SRTC took part in the West Central Community Center’s Neighbor Days Festival this past weekend, to talk to people about our Horizon 2040 plan.
There were a lot of people there, particularly families, so a variety of thoughts were shared with me on transportation. I was surprised to hear though, that for a neighborhood fairly close to downtown, very few of the people I talked to said they use public transportation. A couple people told me their households had downsized to one car though and they had adjusted schedules/work situations accordingly.
There was also a lot of support for bike and pedestrian facilities from the people I talked to, particularly fixing or filling in missing sidewalks, as there is a concentration of elderly and disabled people in the West Central neighborhood. 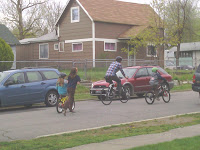 The festival was capped by the first “Kidical Mass” for our community, a three mile bike ride for children, families and pretty much anyone else who wants to take part. Kidical Mass was introduced by the folks who organize the Spokane Summer Parkways events and there will be two more this year; in the Chief Garry Neighborhood on May 18th, at 1pm and in the South Perry Neighborhood on September 12th (market night), at 5pm.The rides highlight safe riding and learning to ride and signal on the road.