My friends John and Angela sold their cool old rental house to the Washington State Department of Transportation earlier this year because it will eventually be in the way of the North Spokane Corridor construction. The house was recently moved to a location just a few blocks away from its original home and John and Angela were there with their camera to document the move. I think these are really cool pictures and wanted to share them. John and Angela agreed and said they were really happy with the way things worked out. They said the WSDOT was good to work with, made them a fair deal, and they were especially pleased that the house was relocated, not just demolished. 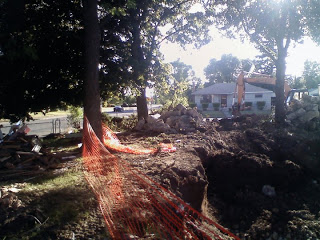