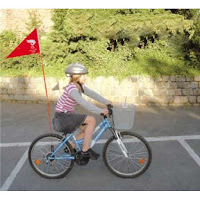 Remember that bike with the sweet banana seat and flag you used to have as a kid? A lightweight flag that was- what?- maybe four or five feet tall at the most?

Well a Missouri State Rep wants people to ride with the adult equivalent of that flag- a 15 foot tall pole with an orange flag at the top. Yes, 15 feet!

Seems to me this pole could cause some safety issues of it’s own: throwing off a rider’s balance and catching low-hanging branches, bridges and wires. If you’re wondering if maybe Mr. Houghton has something against cyclists, he did co-sponsor a bill in 2013 that would prohibit riders from using state roads when there is state-owned bicycle path or trail that runs generally parallel to and within two miles of the thoroughfare. Luckily it didn’t pass.