Mick Cornett To Speak in Spokane on Infrastructure Investments

There has been a lot of talk lately about ways to revitalize our area, including fixing roads, infrastructure and other issues that might make our community a little less great. We are exploring some options through our 2018 Education Series and the next speaker we are bringing to town has some definite thoughts on the issue of a community improving and recreating itself.

Former Oklahoma City Mayor Mick Cornett was recently been named on of “The World’s 50 Greatest Leaders for 2018” by FORTUNE Magazine for work he led to revitalize his city. Cornett has also been recognized internationally and received multiple awards for implementing a $777 million infrastructure program that added a downtown park, streetcar system, convention center and wellness centers. He also oversaw a $140 million redesign of streets and sidewalks.

Under Cornett’s leadership, Oklahoma City now has one of the strongest economies and lowest unemployment rates in the nation.

For his next project, he will be in Spokane on Tuesday, July 10 speaking about how the Spokane area can continue investing to reach similar results. Everyone is welcome so mark your calendars and bring your questions. More info is on the attached flyer. 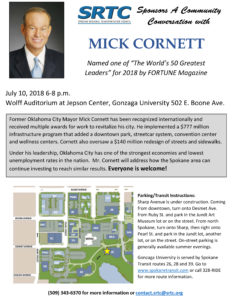