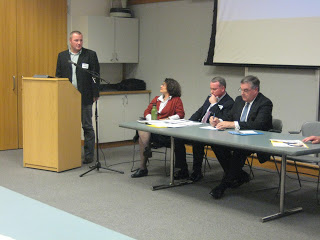 I started blogging last week about a visit to Spokane by Dena Belzer, an Economist with consulting firm Strategic Economics out of Berkely, CA that specializes in connecting regional economic and demographic growth trends to real estate development activity and local policy initiatives. SRTC partnered with the Spokane Regional Health Department to bring Ms. Belzer here to talk about Urban Transportation Corridors (UTCs) and if they’re feasible for our region. UTCs are neighborhoods and districts that can accommodate new mixed use development and roads that can accommodate multimodal travel such as cars, bikes and pedestrians and are served by quality public transit service.

Ms. Belzer’s visit was in conjunction with the work on our long range transportation plan, Horizon 2040. The economic downturn has shifted the emphasis for transportation planning from reducing congestion to identifying projects that will also work to revitalize the local economy. UTCs are one such possible investment, which is why we are taking a look at them. So here’s more on Ms. Belzer’s visit, as I couldn’t fit everything she said into one post last week:

At a forum on UTCs for local business leaders, Ms. Belzer said that local decision-makers need to look for ways to lower construction and development costs. She said one way to do that is to reduce parking. Local developer Mick McDowell was on a panel of other speakers for that forum and agreed. He said he owns enough land to build two buildings the size of the American West Bank building at Riverside and Browne. He said that, if he didn’t have to build parking lots for them, he could build up to five such buildings. And the prices he would charge to lease offices in those buildings would be lower because he wouldn’t have to spend money on parking lots. To do that though, he has to be sure there is a quality transit option to get workers to the buildings.

Another local developer, Chris Olson, also spoke about his experiences building in Spokane and how transit corridors could open the door to new development. Mr. Olson said that we have the basic ‘bones’ of UTCs, such as in the Garland and Perry districts. Even so, he said not everyone is going to see the benefit of living, working and recreating all in pretty much the same area right away.

Scott Chesney, Director of the City of Spokane’s Planning Department, was also on the panel at that forum. He said the City is in the process of updating the Comprehensive Plan and is focusing on devices that invite infill development. He said planning and zoning need to be complementary to each other, and we have to think about redevelopment before it happens in order to make the right choices for the community. For instance, he cited big box stores and how they generally only last ten years in one location. We need to consider this when approving the construction of new big box stores as the City will have to deal with the empty shell of the store later. Larry Krauter, Director of Spokane Airports, facilitated the forum and pointed out that retail has grown five to six times faster in recent years than sales have.

One of the slides in Ms. Belzer’s presentation showed a map from 1923 of Spokane’s street car system. She said this move toward urban transportation corridors is a ‘back to the future’ proposition as it’s already been done here. She also spoke about how important goods movement and manufacturing is to our area and how a system of transit corridors would get workers to those jobs more efficiently, or the products moved to market faster. I’ll expand on that in a post tomorrow.