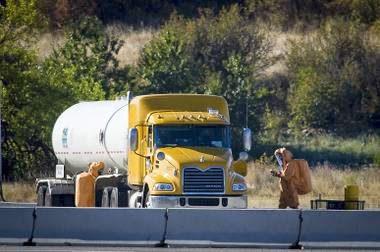 Interstate 90 has reopened this morning, according to the Spokesman-Review, after crews sealed the leak in a tanker hauling hazardous liquid that shut down the highway for 18 hours.

The Idaho State Police reported the interstate was open in both directions just before 8:20 a.m. Multiple agencies determined the risk posed by the leaking chemical required the interstate to be shutdown around 1 p.m. Sunday.

The tanker truck, which belongs to a company in Florida, was traveling to Moses Lake carrying 7,000 pounds of anhydrous trimethylamine. The truck is back on the highway this morning after workers determined efforts to seal the chemical inside the tanker were successful.

The leaking truck was parked at the port of entry just east of the Washington-Idaho state line and a 350-foot evacuation zone was ordered because of the hazardous nature of the chemical, which is highly flammable, highly combustible and poisonous if inhaled. A shelter-in-place order was also given for Liberty Lake homes within a half mile of the leaking tanker.

Several workers and law enforcement officials were evaluated after experiencing throat irritation.
The interstate closure affected the morning commute, with some drivers reporting travel times of up to two hours on their way to work.