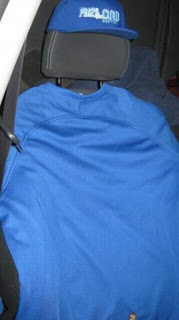 If you saw ANY media at all last week, you saw the picture of the guy with the creepy Halloween doll in the front seat of his car, trying to pass it off as an actual person in order to use the carpool lane in Seattle. Well, according to this Seattle Times article, there are no shortage of dummies, both drivers and passengers, in the High Occupancy Vehicle (HOV) lanes.

State Troopers say they’ve seen everything from mannequins, to sleeping bags propped up with hats, articles of clothing, duffel bags, and Halloween masks on bags. Then there was the lazy, yet creative, person who didn’t bother with a body for his pretend passenger but just dressed up his car seat, as seen to the left.

According to State Patrol officials, HOV violations are the most common complaint they receive from commuters in King County. Enforcement has been ramped up in response.

So far in 2015, the State Patrol has issued 3,000 more citations to HOV violators statewide than last year, with 558 issued in Pierce and Thurston counties, 1,446 in Snohomish and more than 9,500 in King County. Drivers can only legally use most HOV lanes when there are two or more people in the car.

Those who don’t bother with a fake passenger but simply drive in the carpool lane alone often say they moved into the lane because they’d been cut off, they were passing another car or they forgot their children weren’t in the car that morning.

There are some pretty funny pictures of HOV lane violators and their “passengers” at the link above if you need a laugh this morning.