House Transportation Budget Has $ For Spokane, But Not Everyone Happy With It 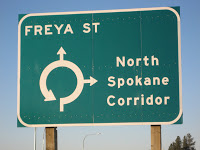 House Democrats yesterday passed a two-year, $8.4 billion transportation spending plan for the state, described by Transportation Committee Chairwoman Judy Clibborn (D-Mercer Island) as “not having a lot of frills.”

The bill contains $79 million for projects in Spokane County, about $68 million of which will go toward the North Spokane Corridor, nearly $4 million for the State Route 290/Trent Avenue Bridge over the Spokane River and $1.3 million for the U.S. 195/Cheney-Spokane Road intersection.

While some feel it is a decent bill for Western Washington, there is a lot of indecision over it in general.
The Spokesman-Review tells us what issues are being debated.