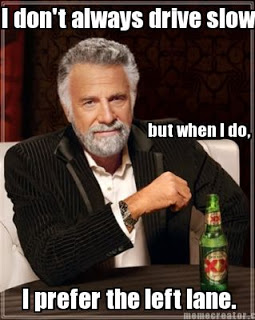 I know several of you who will love this. Driving slow in the fast lane could get more expensive in Washington under a proposal that would impose penalties for “aggravated left-lane driving” with new fines based on how slow they are going.

According to the Spokesman-Review, the proposed Senate bill says driving slow in the left passing lane of a multilane road can create safety hazards and cause other drivers to brake unexpectedly or create traffic congestion.

The state already has a traffic law against driving too slowly and blocking traffic in the passing lane. The fine for that is $136. Washington State Patrol officials said troopers made about 14,000 of these stops in 2015.

The proposed law would add another fine for continuously driving at slow speeds, based on how far below the speed limit someone is driving.

The Senate Transportation Committee could vote on whether to send the proposal to the full Senate in the coming weeks.