Governor Calls for New Transportation Bill While On Tour of Spokane 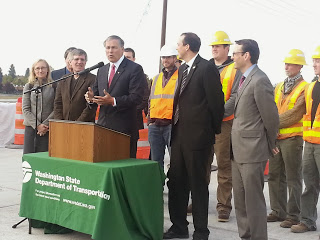 Gov. Jay Inslee was in Spokane today today tour our transportation facilties and urge lawmakers to write a new transportation bill that would include money for the North Spokane Corridor.
He even said a deadline for such a package- by the Apple Cup on November 29.
Inslee also said he’s open to suggestions about ways to save money on transportation costs.

Washington State Transportation Secretary Lynn Peterson was also here, along with several other elected officials such as Andy Billig and Marcus Richelli.

SRTC’s Exectuive Director, Kevin Wallace, also went on the bus tour to demonstate some of our transportation needs to the governor, such as the North Spokane Corridor.

The Spokesman-Review has more.