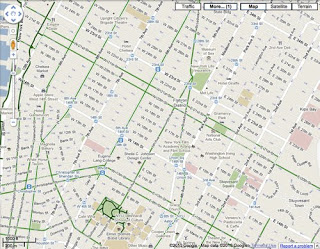 Google is adding bicycling directions to it’s mapping service. It previously only provided directions for drivers and pedestrians. Starting yesterday though, Google will help you get where you’re going on your bike by recommending routes, steering you away from big hills and heavily congested streets and pinpointing bike lanes, trails and paths.

Ryan, the designated SRTC mountain biking enthusiast, played around with it a little yesterrday. He says it works for Spokane, but in his words, it’s ‘a little clunky, still in beta.’ He checked one of his favorite ride routes and found that the Google directions led him right off a cliff! Oh well, it’s early yet, I’m sure they’ll work out that little kink.

While digging around trying to find a legend, Ryan says he found a helpful video tutorial that you may want to check out and some info on the line colors/styles:

– Dark green indicates a biking-only trail
– Light green is a dedicated bike lane along a road
– A dotted green line means it’s not an official bike lane or trail, but is probably suitable for biking based on terrain, traffic, and intersections.

Now that Ryan’s done the dirty work for us, try it out yourself and let me know what you think.