A Good Way To Kill Some Time On Friday 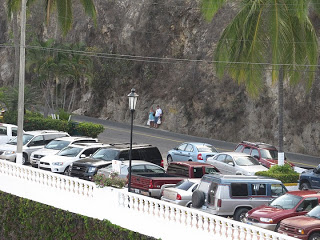 It’s Friday, there’s not a lot going on in transportation news, and it’s snowing outside. To cheer us (and by ‘us’ I mean ‘me’ of course) up, let’s go to my happy place: Mexico. That’s right, I’m fortunate enough to have friends with a place in Puerto Vallarta, so I just got back from a cheap vacation there. So that it doesn’t sound like I’m talking about myself though, and because this is a transportation blog, let’s talk about transportation in Mexico.

To start with, we made a point to get everywhere by bus if possible. See those people huddled against the rock wall in the picture? That was the bus stop across from our hotel. Standing on Highway 2 waiting for the bus isn’t looking so bad anymore is it? 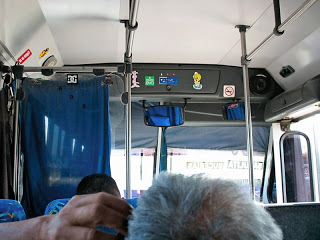 Once you got on the bus (assuming you lived to do so), there was lots to see. Many bus drivers decorate their buses with curtains, decals, fuzzy dice, etc. and they also provide you with music at high decibels; usually traditional Mexican mariachi music or techno. I’ve never been a techno fan but there’s one beat I just can’t get out of my head now.

Some buses even had live music. These were two musicians who jumped on at our stop and played and sang all the way downtown. When they got to the transfer point, they jumped off our bus and got on another, presumably to sing and make more money.

Many of the bus stops weren’t even marked, you just had to know where they were. This one was marked with this shrine though. I’m not sure if that’s to show that someone died there (probably because it was right next to a high speed two-lane highway) or if it’s just a convenient place to worship while you wait for the bus.

While the buses were very popular there, many people created their own mass transit.

This one is hard to see because it was taken from a moving vehicle, but that’s a man and woman on a motorcyle with a baby between them. I also saw pregnant women in the back of pickup trucks and people lying on top of loads to keep them from blowing out. Apparently bungee cords aren’t popular in Mexico.

The pedestrian ‘walk’ signs there were really cool. They were animated and actually showed someone walking, although it looked more like he was doing the electric slide.

Okay, I’m done talking about myself- I mean transportation in Mexico- now. Don’t we all feel better now?