Get Your Sharrow 411 Here 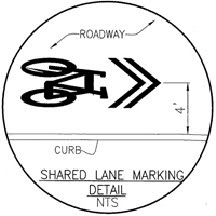 The folks at the City of Spokane say they’ve been getting some questions as to how to ride/drive in a sharrow so they want to get the word out on how to use them. So pay attention:

Sharrows are pavement markings installed within travel lanes designed to alert motorists that they are sharing the street with bicyclists and to help bicyclists position themselves in lanes to allow motorists to safely pass them.

These markings have been used successfully in other cities across the country, including Seattle, Bellevue and Portland. In Spokane, the markings were unveiled in 2009 and motorists can expect to see more added in the future.

To use a sharrow:

Bicyclists:
Use the sharrow to guide where you ride within the lane – generally through the center of the sharrow when safe to do so.
Remember not to ride too close to parked cars – watch for opening doors.
Ride in the same direction as traffic.
Be aware of your surroundings, and follow the rules of the road.

Drivers:
Expect to see bicyclists in the travel lane.
Pass to the left of the cyclist, using the adjacent travel lane. Remain behind the cyclist until it is safe to pass.
Yield to on-coming bicyclists when turning and look right/behind you when making a right-hand turn.
Be aware of your surroundings, and follow the rules of the road.

Got it? Any more questions/comments?