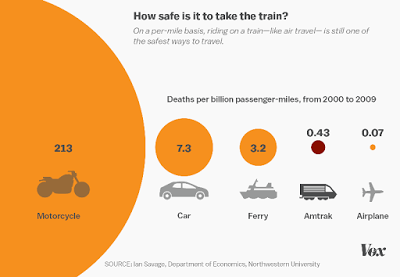 With the Amtrak derailment in Philadelphia this morning, there’s been a lot of talk about what went wrong. What most people don’t know is that train travel is generally much safer than other forms of travel.

In a comparison study conducted in 2013, fatality rates for several different forms of travel were analyzed.

The number of rail deaths from year to year ranges widely (because many can happen in large, sporadic accidents), but between 2000 and 2009, a person was about 17 times more likely to die while traveling in a car, compared to a train, for the same distance.

Vox has three other facts they say everyone should know about train accidents, including how common derailments really are, what’s being done to cut down on derailments and what usually causes them.