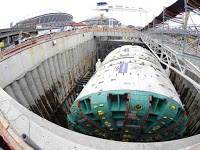 Do you ever read the “Best Of” ads on Craigslist? Well apparently someone does because they found a parody ad posted last week that seems to indicated the tunnel-digging machine Bertha may have overstayed her welcome in Seattle.

KREM 2 News says the ad starts by stating that a single lady is looking for someone to share her spacious waterfront home and goes on to say that Bertha, never mentioned by name, has already stayed much longer than intended in this location.

Bertha is drilling the new State Route 99 tunnel under Seattle. This work was supposed to be complete by now, with the tunnel opening by the end of this year. Unfortunately Bertha broke down and has been sitting idle for nearly two years.

The ad describes Bertha’s current location as “The unit itself could be described as a daylight apartment; it’s technically below the ground, but it gets lots of light.” It goes on to describe the rent ($350,000 for everyday that Bertha doesn’t move) and some stats about her, such as that she is white, 7,000 tons and almost 60 feet tall.