Digital License Plates with Changing Messages Being Tested in CA 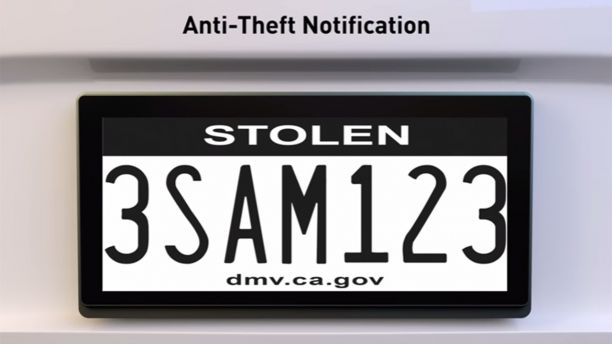 Move over autonomous cars, there’s more crazy technology coming to the transportation world. License plates that can change what they say and track the vehicle they’re  attached to are being tested in California, according to Fox News.

The City of Sacramento last week purchased 24 Chevy Volts equipped with the plates, which cost about $700 each.

The plates have screens like e-books, and are equipped with a GPS tracker that can transmit the location of the vehicle. They have a reflective surface, backlighting, weatherproofing and are hardwired to the car. Users can modify the display with custom messages via an app and electronically update their registration without visiting the DMV. They’re being marketed as a fleet management tool for commercial outfits that can double as a promotional platform, as the screens can display company branding and advertisements when the vehicles are parked, while still showing the plate number in a smaller font.

The license plates are being called the ultimate vanity plate as they can be updated on a whim to show support for causes or sports teams, or simply to project a personal message for the day.

Owners can also have the plates say “stolen” if their cars go missing, while emergency messages, like amber alerts and flood warnings, can be blasted to all of the devices in an affected area in an effort to reach other motorists.

In addition to the upfront cost, there is a $7 monthly fee for the plates, with additional costs for the GPS tracking feature.

If you’re worried about Big Brother monitoring your driving habits via the GPS, officials at Reviver Auto, who makes the license plates, say data will never be shared with the DMV or law enforcement, and promises that the company will not sell any information to outside companies. No personal data is stored in the device itself.

The Arizona Department of Transportation is also testing the plates on a dozen of its state-owned vehicles.