Conceptual Map of What US High Speed Rail Could Look Like 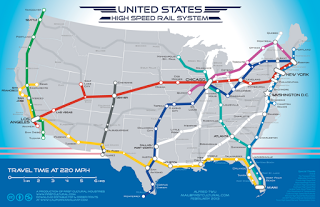 In 2009, President Obama announced a new vision for developing high-speed intercity passenger rail in America, calling for a collaborative effort by the federal government, states, railroads, and other key stakeholders to help transform America’s transportation system through the creation of a national network of high-speed rail corridors.

Congress made $8 billion available but not much else has happened since then. Recently though, a conceptual map of what a nationwide high speed rail system could look like has been making it’s rounds on the internet.
So above is a look at that map and you can find more info here.