Centennial Trail to be Separated from Pettet Drive 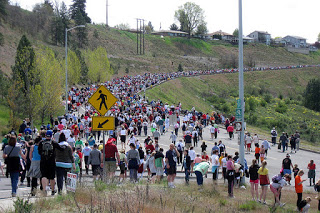 The part of Spokane’s Centennial Trail that goes up Doomsday Hill (also known officially as Pettet Drive) could get a makeover. A new City of Spokane plan would pave the trail on both sides of the river and separate it from the existing roadway.

According to the Spokesman-Review, one of the trails will run on the river side of Pettet all the way down the hill. Another will go up to the neighborhood overlooking Doomsday.

Lorreen McFaul, executive director of Friends of the Centennial Trail, said Pettet always has been an official part of the trail, even though it consisted only of sidewalks and a bike lane. She is excited the City has found a way to make the trail “official” in that stretch.

To do this, the lanes on Pettet Drive will be reduced from 14 feet wide to 12 feet. The new stretch of the trail will be 14 feet wide and separate from traffic.

Brandon Blankenagel, an Engineer with the City and a member of SRTC’s Transportation Technical Committee, was the mastermind behind having a spur of the trail go into the neighborhood above. Originally, the plan was to just add bike lanes to the existing, steep and narrow roadway that lead into the neighborhood. As an alternative, Blankenagel came up with putting the trail on an old rail grade.

The work on the new trail system will take place over the next three years.