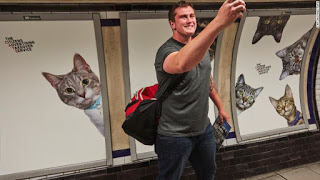 The Clapham Common subway station in London is overrun with cats. They are everywhere- staring at you from giant posters on the wall and from stick-ons on turnstiles.

According to CNN, the cats are part of a crowdfunded campaign to replace all ads. The campaign raised more than $26,000 to make 68 ads at the station disappear. Their replacement are photos of stray cats from two area rescue groups.

The idea came from a group called Citizens Advertising Takeover Service (or CATS). Instead of asking you to buy something, CATS wants you to think about what’s really valuable.