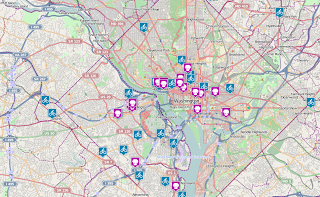 You may have heard of the concept of a ‘food desert’ recently through work the Spokane Regional Health District is doing to provide healthy food options to the less fortunate. A food desert is considered a region or neighborhood where residents have to travel more than a mile to buy groceries. Population density and income levels also play a factor in defining food deserts. The West Central neighborhood in Spokane is considered a food desert.

While food deserts are a serious issues, a Washington, D.C. cartographer is having fun with the concept by building a map of D.C. area ‘bike and cupcake shop deserts,’ as seen in the map.

M.V. Jantzen says it started out as a more serious project but making light of it was a good way to show the community how new technology and mapping can play a big role in transportation and infrastructure planning.

It is a cool concept. You can play with it here to see what he’s done. And Mr. Jantzen wasn’t joking, some areas have a glut of cupcake shops while others are cupcake deprived.