Brown is the New Green; At Least Along WA State Highways 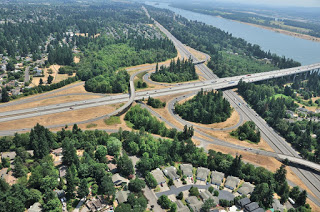 If you’ve traveled around Washington at all this summer, you may have noticed that some of the vegetation surrounding state highways and freeways isn’t looking so- um- fresh. In fact, some of it is mostly dead.

The Washington State Department of Transportation blog says that vegetation plays an important role in keeping the soil in place along sloped areas, filtering stormwater runoff, and absorbing pollution, among other things. Native plants that require little maintenance are generally used in transportation projects to reduce staff and equipment costs. Many of the plants naturally go dormant in the summer, although it’s usually later in the season.

Despite being known as the Evergreen State, the hot weather this year and the drought have sped up this process, leaving behind swaths of brown near major roadways. Even so, crews still mow the areas that appear to be growing, to keep fuel for potential wildfires limited.

So while the brown vegetation throughout the state might not look the best, allowing them to ‘go brown’ follows the natural life cycle of native plants and conserves limited financial and water resources.