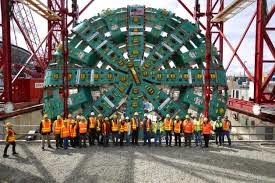 The project is currently at a standstill as the giant drill (named Bertha) used to drill a tunnel under Seattle to replace the viaduct is broken down.

Despite large cost overruns caused by this delay, it looks like it may be harder to get rid of Bertha than that. Here’s why the chairman of the Senate Transportation Committee says the bill isn’t going to be heard by his committee.