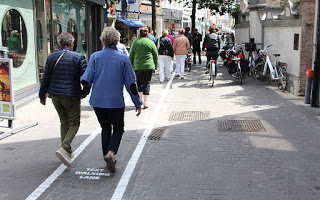 A Belgian city believes it has come up with a solution to the problem of pedestrians bumping into other people because they’re texting while walking.

The lanes were the idea of a local mobile phone business, Mlab, which says many smartphones are broken in collisions between pedestrians.

No worries though, there are now believed to be more mobile phones in the world than people. There are about 7.5 billion mobiles, according to data provided by telecommunications companies. In comparison, the global population is estimated at 7.2 billion.

So my question is, since people are paying attention only to their phone and not their surroundings when ‘text walking,’ what’s to keep them from wandering out of their lane and into others, just as before?